This short posting is for a friend who seems to appreciate my China story so much, one who has been wanting to visit the People's Republic of China and do all the things I was privileged to do. Alhamdulillah wa shukrulillah.

But overall, there's nothing to be envious about. It's not an ordinary fun touristy trip. We had only 20 minutes to shop at one store before we flew home. Yes, but there is no reason to complain really because we are NOT important. Our wants and needs are not as direful as many of those we visited in Lanzhou, Linxia and Zhaotong. That's the most valuable lessons learned after having visited the less fortunate Muslims in China.

Hope and pray, more people would open their hearts to visit Muslims in China especially those who could use a little help from us. Will share a couple more stories soon InshaAllah.

Indeed, there are many doors to China if you care to spare some time and make a meaningful trip, other than shop til you drop in cities like Guangzhou or Beijing.

The great halal of China


I know I owe you another three postings on China: that is on Linxia, Zhaotong and Sister Mariah Mah. But before that, let's just talk about food for a change.

So I learned, the Chinese will serve at least 8 to 10 dishes in a meal. But a truly grand dinner/lunch would have 8 hot dishes, 8 cold dishes, and some bread, noodles or rice and soup of course. Yo Siang (literally means delicious oil/fry) is a type of traditional bread that is often served on a religious occasion. There are 8 types of Chinese cuisines altogether. I don't know their names, but I could taste the different styles of cooking between Lanzhou and Kunming. A must-have dish for a special guest is boiled mutton. Simple. No need to do much to impress your guests.

That's it - the great halal of China for you!
Go visit China y'all!


Alhamdulillah wa shukrulillah, we were able to visit many Islamic institutions and initiatives of various kinds in Lanzhou, China. Many thanks to Sister Mariah Mah who organized everything thoroughly and thoughtfully for us. Sister Mariah Mah is one outstanding personality of Muslim Chinese descent. She is based in Singapore and visits China every two months as she actively channels funds for plenty of charity work for Muslims in China. She was named one of the world's 500 influential Muslims in 2009. This amazing lady deserves a special posting.

You may want to check out her activities on http://www.chinamuslim.net/ and just keep in mind that everything you read about this trip to China, all credits pertaining to travel coordination and local contacts, go to Sister Mariah Mah.

On our second day in Lanzhou, after visiting the grand Ling Ming Tang Gong Bei hilltop complex, we visited six sites which exposed us to unsung charitable personalities and the initiatives they lead and/or support.


Next posting will be about nur Islam in Linxia which is known as the "Little Mecca of China". To get to Linxia from Lanzhou, one needs to travel 3 hours by road through rugged and somewhat precarious mountains.

Praise be to Allah for this opportunity, for keeping us safe and for providing us with rizq throughout our journey. Alhamdulillah wa shukrulillah. And may Allah purify our intentions and forgive our sins. Ameen.

Posted by E. Ismail 6 comments:
Email ThisBlogThis!Share to TwitterShare to FacebookShare to Pinterest

Alhamdulillah wa shukrulillah. I don't know how and where to start. There's just too many lovely photos and wonderful experiences to share about Muslims in China, particularly those in Lanzhou, Linxia, Zhaotong and Kunming. We took a strikingly different route than most people - no Beijing, no Guangzhou and the likes. Next time maybe InshaAllah. Our journey started via Shanghai but we just saw a glimpse of Shanghai, or rather a blink of Shanghai.

Because we meant business, we went straight to Lanzhou which is about 4 hours by flight to the west of Shanghai. Situated in the Central/West of China, Lanzhou was one of the Silk Road stops during the old days.

Nestled in the busy Lanzhou downtown is the Xiguan Mosque of Lanzhou (above and below pic). Yes, I too found it hard to believe to see so many of the men wearing turban/head gear in Lanzhou - a place I never knew existed. If you were to look carefully at the photo, people actually stand on the narrow carpet and make sajada (prostration) on the wooden floor i.e. the gaps in between the long/narrow rugs which formed the saf.

The first Muslim complex in Lanzhou we visited was Ling Ming Tang Gong Bei. If a Muslim complex is known as Gong Bei, that essentially means the complex also houses a tomb of a shaykh or a prominent scholar or founder of the madrasah. There is a total of four Gong Bei in Lanzhou, a city which appeared bigger and busier than KL. It is also the only city that is blessed to have the Yellow River passing through it.

Ling Ming Tang Gong Bei has two tombs of its first and second spiritual leader - Mahim Mim who died in 1925 and Shan Tse Jiao died in 1955. We were lucky to be able to visit the entire complex including the two tombs which are usually closed for public. Its current resident scholar, Wang Shou Tiang, 94, treated us to sumptuous snacks which comprised of sweet Lanzhou honey dew, melons, local dried fruits and nuts.

To be continued InshaAllah. Until then, here are some photos for you. 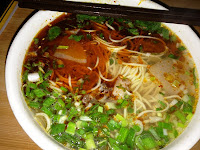