Alhamdulillah it's 13th Ramadhan already. It is obvious, this faqir has not been given the tawfiq to share more over this space this time around. Everything belongs to Him. He gives. He withholds. And He gives all kinds. He gives me some really nice people who wrote in to say how much they have missed me and gave some gifts in the form of prayers. He has also sent people who are not nice at all, people who threatened me and spread words about my past sins. I thought it's funny how people like to be a recorder of other people's deeds, play judge and play "sins-broadcaster". Some people have got nothing better to do. They must be lonely.

But we seek solace in our Lord and we submit ourselves entirely to Him. He knows all about us, both good and bad. He records, He weighs and He judges. Allah Hakeem.

Yesterday I saw this apt posting on a friend's FB wall - a good piece of advice from Shaykh Ninowy. 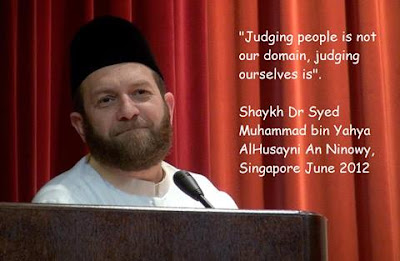 And Allah is Kareem indeed. Though He may withhold something, make you a little sad in one department, He may make you rejoice in some other departments. When we are tested we try to be patient. When we are gifted, we say: Thank You Allah for Your munificence!

Posted by E. Ismail 2 comments:
Email ThisBlogThis!Share to TwitterShare to FacebookShare to Pinterest

Ya Xing - Star of Linxia | Little Mecca of China


Linxia is 2 hours by road to the south of Lanzhou - the capital of Gansu province in the northwest region of China. By road, I mean quite a precarious route across the barren rugged mountain - almost like those you see in Mecca. Coincidentally Linxia is known as little Mecca of China.


We headed for Linxia with only two objectives: to visit a world-class Islamic kindergarten & primary school, and a private orphanage. I couldn't resist adding the word Islamic to this unique school named Ya Xing because it is clearly managed on Islamic principles. But it's better to project Islam through practice than just a name, is it not?

According to the school's principal Mr. Lin Qing Zong (Abu Bakar), Ya in the Chinese language means gentle and Xing means star. The school does produce gentle stars. Its first shining star was Asmah who became a hafizah at the age of 7 after having spent three years at Ya Xing Kindergarten. Abu Bakar, a graduate of Islamabad International Islamic University is himself a hafiz. He spoke to us with great passion, the mission, and vision of Ya Xing Kindergarten which he co-founded in 2006 together with another two friends Nuh and Ishak. They initiated this exemplary institution with only 37,000 Yuan (about RM 20,000).

Ya Xing Kindergarten is, believe it or not, a boarding kindergarten. Yes, children live in the state-of-the-art complex for about 350 days a year and attend lessons 7 days a week. They are exposed to both modern education and religion. "Graduate of Ya Xing kindergarten should be both a hafiz/hafizah and a well-rounded student. Ya Xing derives its name from Surah Yaasin which is the heart of the Quran. And Quran is the heart of Ya Xing Kindergarten & Primary School. Yaasin is also one of the names of Prophet Muhammad." - said Abu Bakar.

Adjacent to the kindergarten quarters is proper music and dance room, and a well-equipped clinic. Everything is in order and very neat. As can be seen in the photos, toothbrushes, and towels are kept in sterilized cupboards. Each child is given a separate towel for face, hand, feet, and body - all clearly labeled and kept in a sterile cabinet. Their lockers are super neat. Mugs, jackets, and shoes are also neatly stored.

The kindergarten complex has a common kitchen which is also squeaky clean and graded "A" by the local authority. Plates and cups are stored in a sterilized cabinet. Children eat 3 meals plus supper daily and their diet comprises quality food e.g. honey, milk, fruits, and nuts. Children pay 300 Yuan (RM150) per month for food and 2000 Yuan (RM1000) for kindergarten tuition fee per semester. Because primary education in China is free, students at Ya Xing Primary school need only pay for food which is only 400 Yuan per month.

The facilities at Ya Xing Kindergarten & Primary School is very impressive so it's not surprising that the waiting list is up to the year 2016. But the selection process is quite stringent. Prospective kindergarten pupils will be interviewed to see if he/she can eat by him/herself; pronounce words clearly; has an acceptable intelligence (tested through special games) and if they come from religious family background.

Students who get accepted at Ya Xing can expect to receive full attention. The teacher-student ratio is 1 to 3.2. There are five categories of teachers:
- Normal teachers (for teaching common subjects i.e. Maths, Arts, etc)

Children spend 6 hours in school, 8 hours for sleeping, 4 hours for playing and 6 hours for memorizing the Quran. The school has a total of 292 students, some of whom are from abroad i.e. Africa, Pakistan, Yemen, and Syria.

Facilities at Primary school is even better. It has an up-to-date auditorium and a computer/internet room equipped with the latest PC. Abu Bakar the principal showed us every corner of the Ya Xing complex including the student's bathroom which has been specially designed for children, and the school's financial records which are all transparent and well kept. He even showed us his salary slip. MashaAllah a relatively small sum compared to what he could have earned from good positions he had been offered in universities and corporations. Abu Bakar has a Master's degree in aqidah and philosophy and was granted a gold medal for having a GPA above 4. He is now doing a PhD at Washington University. 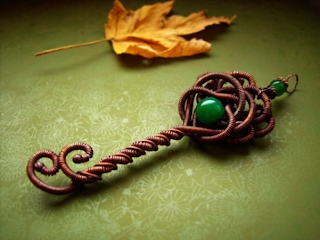 Timbuktu Books of South Africa will be hosting a discourse on the noble lineage and blessed birth of Rasulullah salallah alaihi wasalam by Muhammad Allie Khalfe.

Livestream:
https://new.livestream.com/accounts/1902143/events/2240199
Posted by E. Ismail No comments:
Email ThisBlogThis!Share to TwitterShare to FacebookShare to Pinterest

Mosques in Zhaotong China | Remember them in your prayer this Ramadhan


Muslims in Malaysia and many parts of the world are lucky because we can freely choose which masjid we wish to go for teraweeh prayers or iftar and the masjid would most likely be very comfortable. Sometimes we become even more choosy in Ramadhan as we would select our favorite masjid based on the imam, the masjid's location, if the AC is good enough, or if it's known to serve good iftar meals. We are spoiled, aren't we?

This Ramadhan when you are at your local masjid no matter where you are - Malaysia, South Africa, Singapore, UK, US, France - please think of our Muslim brothers and sisters in Zhaotong, one of the poorest regions in China.

During my recent trip to that faraway land, we were taken to a few villages on the hilly side of Zhaotong which is an hour flight north of Kunming in South China. Below are some photos of the mosques in that area that need a little help.


Next, we went to Masjid Siao Se Chow, also in Zhaotong. My heart sank at seeing the hopes on the villagers' faces as they lined up to greet us. There were about 200 of them waiting eagerly to see only five of us, and we are nobody! We didn't bring anything to offer them as we weren't expecting such a warm welcome. All we brought with us was just a sincere intention that we would soon bring some kind of aid to fulfill their wish for a bigger and better masjid, InshaAllah.

Happy but hopeful villagers saying goodbye to us.
May Allah make it easy for us to contribute something beneficial to them. Ameen

The third and final masjid we visited was Masjid Xian Jia Ping, situated at a higher elevation of the hilly Zhaotong settlements. This masjid serves about 400 Muslims. Each household contributed about 2000 Chinese Yuan (approximately RM1000) for the purpose of building a new mosque. Children in this village have to walk some 7 km to get to the nearest kindergarten. The nearest primary/secondary school is 20 - 40 km away. 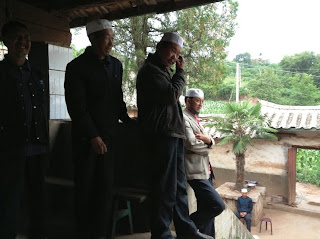 O friends of Lisan al-Din,
Please remember our Muslim brothers and sisters you see in these pictures. Please make doa for them so that Allah will grant their wish for a better masjid and that Allah will improve their living standards. 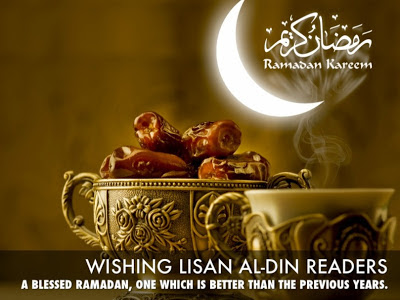 
Alhamdulillah, here it is, the most auspicious time of the year. Rejab has left us. Shaaban too and here we are standing before the most special month. Some of us might be offering the first Teraweeh prayers on Tuesday. Some of us are fortunate to be in Makkah/Madinah this Ramadan. May the blessing of this holy month permeate from the Holy lands to each and every Muslim soul.

Sometimes we have a feeling we could have done better in Rejab and Shaaban, but God knows best. It's better to feel inadequate like a faqir before God than to feel confident about our ibadah. So we stand before the heavenly gate of Ramadan with khauf (fear) and raja' (hope) that it will be, in the eyes of Allah, better than the Ramadan of the previous years.

This is the 5th Ramadan we shall witness together on this shared space. Though you may be far, though we have not met, we all convene and mingle in the blessed spirit of Ramadan, you and I.

I seek your forgiveness if my "voice" appeared harsh sometimes. Yes there is a voice in a piece of writing. I just hope some of you have heard the softer voice of my soul. Pray our souls belong with those who are gentle and needy. In our gentleness we yearn for strength from Him. In our neediness, we pray the Almighty will grant us more. And more so in this blessed month of Ramadan bi-iznillah.