Let us all act upon this assignment. To state the obvious, Habib Umar is recommending it to us for our own good, in this world and the hereafter.

May Allah grant us the tawfiq to act upon it. May Allah make our tongues light and inclined to lofty affirmations. May Allah enliven our hearts with the remembrance of His Essence.


I feel obliged to convey even a single verse and encourage a good deed even if it is small, even if it was already spoken about in 2015.

We have found ourselves in a big predicament, health-wise, and economically too. In the Malaysian context, it started to get worse in mid-March 2020. As you are all aware, I am referring to the Coronavirus pandemic that snowballed from China to the rest of the world. The heartbreaking status, worldwide, as of now, is as shown below:


Two Malaysians have died, and the latest count of confirmed cases is 790 for Malaysia. This number will skyrocket if Malaysians do not observe the restriction of movement as ordered by the authorities. According to the health experts, we have a small window of time to curb the spread of the virus; else, we'll see a spike in the graph just like what happened in Italy, among others. In the next few days, the number could increase to 2000 cases, and from then on it would quickly climb to 4000 cases if we do not make an effort to practice social distancing and restrict our movements. By then, the health-care support would be severely strained!

I think it is wise to recite this selawat taught by Habib Umar in 2015.

O Allah, O Best of Protectors and Best of Supporters,
bestow prayers and peace to the amount of Your knowledge
upon our Master Muhammad
the one You made for us an impregnable fortress
and upon his family and companions
and by him, support us and all Muslims
through the secrets of
'That Allah may support you with mighty support.'

***
We are Muslims; thus, we pray in our own unique way, and this is one of the afdhal ways - making selawat and tawassul through the Prophet salallah alaihi wasalam.

We pray so that Allah will support them and support us with mighty support. Today is Day 1 of the Movement Control Order. During these 14 days, let's busy ourselves with making this selawat. This, I remind myself, first and foremost.

The original posting in 2015 where I mentioned this selawat taught by Habib Umar bin Hafiz:
https://lisanaldin.blogspot.com/2015/01/new-salawat-taught-by-habib-umar-bin.html

May we benefit from the lesson, and may we draw strength from the awliya and solehin.
Aamiin.


Posted by E. Ismail No comments:
Email ThisBlogThis!Share to TwitterShare to FacebookShare to Pinterest

Beauty is in the eye of the beholder. 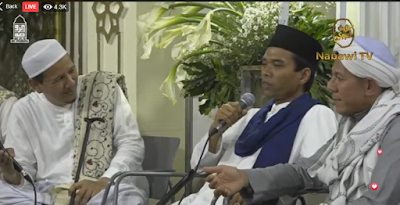 Habib Novel bin Muhammad Alaydrus [pic: left] is a regular host at Masjid ArRaudhah in Solo at Central Java, Indonesia. I have been actively (albeit remotely) following the majlis taalim and mawlid organized in Java, particularly those held at Masjid ArRaudhah and Gedung Bustanul Ashikin [hosted by Habib Syech AsSegaf].


During a majlis last Friday, Habib Novel said this week's event would be extra special on three accounts: to commemorate the upcoming Israk Mikraj, his birthday and there'd be a couple of special invitees.


Masjid ArRaudhah was well decorated with beautiful bouquets of flowers. To be frank, I've not seen mosques in Malaysia being decorated with flowers on any occasion. Ever since I follow the live streamings on Nabawi TV [a YouTube channel that focuses on Indonesian events], I'd noticed many beautiful event set-ups. So I'd like to say Mabruk Indonesia!

The gathering hosted by Habib Novel was casual and jovial, as always, as he's a humorous person. The crowd, both at the mosque and online, were clearly pleased to see the three special guests, namely Ustaz Abdul Somad [top pic: center], Habib Segaf Baharun [top pic: right] and Buya Yahya [below pic]. 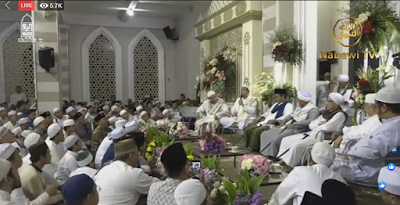 When Habib Novel asked the three guest scholars how they felt about being in the same gathering, Ustaz Abdul Somad's reply in the Indonesian language was succinct and profound. He said: "Semua kata kalau dicerita dengan kata, kata pasti berdusta." Should one make an attempt to describe his feelings in words, his words would tantamount to a lie as it is impossible to accurately describe one's emotions.


In the wake of the Covid-19 pandemic, Habib Novel reminded the audience to only fear Allah and not fear the Coronavirus or any illnesses. Yet one should not be arrogant towards it, instead one should always be vigilant. To seek medical remedy is a part of faith [iman] and one should also seek 'medication' by making plenty of du'a. One du'a that is highly recommended is Selawat Thibbil Qulub. It is said to be a cure for any kind of illness if one were to recite it 4000 times.


Habib Novel is one who regularly reminds his jemaah to have big intentions [niyyat]. In one of his previous lectures that I watched, he talked about his ambitions to expand Masjid ArRaudhah. Nothing is impossible, "I used to only own a motorbike, but I dare dream of building a mosque such as this."


During the lively session last night, Habib Segaf Baharun shared one unforgettable lesson his father taught him. His late father, a well-known dai'e, once told Habib Segaf: "Engkau Segaf, harus merasa kamu itu paling rendahnya orang. Dan harus berada di titik null." That he should feel as if he is the most insignificant person no matter where he goes, and that he is nothing.

p/s
Just a few takeaways there from the live streaming on Nabawi TV last night. Please pray for me as I've got tonnes of office and MBA assignments to do, it's terrifying. But still, I thought the majlis at Masjid ArRaudhah was too beautiful to let it slip from this blog. Alhamdulillah ala kulli hal.