Alhamdulillah wa shukrulillah, to have lived thus far. I will be 48 tomorrow inShaAllah. No, I am not shy about revealing my real age. Some blog readers thought the age I had been disclosing was a fictitious number. I don't belong with those who aren't proud of the time that Allah has given them. If I were God, I would cut five years from their "shelf-life" since they are shy to be on the "shelf", you get what I mean? And since I am open and grateful for my age, I hope the Almighty would add five more years to the pre-determined period. LOL.

What would I/you do if we were given a bonus of five years? I could/might do a Ph.D. and write a book but that sounds like just another "big-ticket" item. The countless good intentions and small deeds that we might/could do within five years would carry a lot more marks than the seemingly major activities, like the prostitute who got to enter the Heaven for the mercy she showed towards a thirsty dog. She gave him/her water. (Refer links below for this 'Whore & Dog' story)

Perhaps, a major lesson in that narration is that no matter what business/life plans we have, what would be more crucial is the degree of mercy/kindness/positivity we show towards others - both man and animals, on the day to day basis. And...frankly speaking, I am worried to be taking more than giving and whilst I "give", it is substandard in the Book of the Lord. At the very least, I hope the messages that I had been posting, were able to touch your heart albeit in the faintest manner.

Having said that, I cannot promise to be nice to everyone. To be frank I had blocked one reader from communicating with me because he asked me how I handled my nafs and that he talked about being a healthy male and a sapiophile. [Sorry bro, I don't care if you are an avid reader of this blog. I can't entertain chats like that].

So now you know some of the questions people asked me. If I had not stopped the conversation, I would perchance lose two months of my life just replying to messages like that. I am sure you would all agree with me that Whatsapping, FB Messengers, IG messaging etc. eat up a lot of our time. Yeah.. it would get worse for me personally when Semester 2 begins. But I must thank the Lord really that my office workload has been very light this year Alhamdulillah.

By the way, this one thing I heard a couple of days ago truly impressed upon the heart. About Asma binti Abu Bakar who tore her belt into two just so that she could fasten some food supply onto a camel. It was for the sake of Prophet Muhammad salallah alaihiwasalam and her father Sayidina Abu Bakar who were then leaving their secret hideout at Thawr Cave. For her ingenuity, the Prophet named Asma as 'She of the two belts' (Zatun Nithaqhain).

Would you do the same? Would you tear up your belt? Would you be clever when a situation warrants you to be clever in coming up with a quick solution?

This hijrah story about the closeness of friendship between the Prophet salallah alaihiwasalam and Sayyidina Abu Bakar never failed to make me shed tears, every single time.

I reckon I have got more than 48 scarves, what good are they for the faith which I believe in? Is it good enough as a symbol for being a Muslim? There must be more to it, there must be a lot more we could do to benefit others, no matter how small the gesture, even half a belt counts!

Thanks for reading.
Wish you a wonderful month of Muharram and a sweet September - what's left of it. 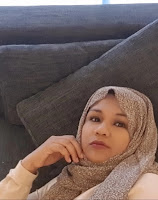 A story about Asma binti Abu Bakar (in Malay though)
http://assalambs.blogspot.com/2012/05/kenali-asma-binti-abu-bakar-as-siddiq.htmlv
Posted by E. Ismail No comments:
Email ThisBlogThis!Share to TwitterShare to FacebookShare to Pinterest


Allahu Hu Allah, I really don't know how to begin addressing the questions and remarks made by a reader of Lisan al-Din who had approached me on another social media platform. I feel obligated to reply because he has been reading this blog for many years, long enough to notice that this space has evolved, that my postings have evolved and that he seemed to respect and understand the evolution. I am obliged to reply because I understand how it feels to be a Muslim who yearns to know more about our raison d'etre vis-a-vis the Lord. I can only write from my own experiences, needless to say. And oftentimes the person who tries to answer might end up learning more from the questioners.

So it all started with hard rubs LOL. Rumi said, "If you are irritated by every rub, how will you be polished?" Initially, I felt like the Lord rubbed me really hard and I felt overwhelmed. The moment I started feeling overwhelmed, I began taking major actions. No, I shouldn't say "I" was the initiator, it was the state itself that moved me as a mere actor. I remembered feeling engulfed by a strong desire to wear hijab, I was overtaken by a strong power that couldn't possibly be me (my own will). I remembered feeling overwhelmed about starting this blog and naming it Lisan al-Din, it was like telling me "Hey you, I am going to make you do it", I was shaking, feverish in fact. It just had to happen, no two ways about it. What I'm trying to say is that we are weak and we can merely respond to a stronger force that controls us. Who is in control of us who holds us by the forelock? Let's say it's He. He made me thirsty for books on Sufism for many years, He sent it to me through a vessel of His choice, He made me read them feverishly, and He imparted some understanding into my heart. All we could do is embrace His actions and motivations on us. La hawla wala quwwata illah billah.

Dr. E, (the questioner), if you were able to notice how I have changed over the years, I mean since you're able to observe the changes, the evolution of my soul through my sharing/postings which I had knowingly or unknowingly exposed to the public for the past 10 years, then you have seen Him, for He is Time. It was all a manifestation of His af'al (actions) and attributes (Names/Sifat). We are merely a receptacle. Yet He wants us to know Him. We should not just be a dumb passive receptacle, we should be one who has a discerning heart to notice His gestures, to notice His presence, His omnipresence and subsequently glorifies Him.

I remembered Shaykh Yaqoubi and a few more shuyukh elucidating the real meaning of a Quranic phrase about the obligation to worship Allah. Worship, as I understood from them is wide and beyond the physical acts of worship. One important aspect of it is to know Him through His asma', sifat and af'al (His Names/attributes and actions). Yes, in our search for better understanding or rather better realization of who He is, we walked and we walked, we met so many teachers, some were genuine, some were fake, some were riding the religion, few actually supported the religion, some were attracted to my appearance and keen to marry me, some were interested in collecting funds and support for their ongoing religious projects, some had reps to woo people so we belong with their fraternity and not others, and there are as you know it, so many religious WhatsApp groups out there. We learned from them, we learned about them and about ourselves too. It's easy to get tired along the journey. But let's not be fooled by misunderstandings or the complexities that some religious people try to impose on the religion because He has made the deen easy for us. So don't let anyone complicate it for us. Take it simply as it is.

For the past two years or so, it was clear to me, that it was time to re-prioritize my time, to spend more time reading and reflecting on the Quran, making plenty of selawat and focusing on one route to Jannah through my dear mother, to attend to her as best as I could.

Dr. E, do not fret, do not worry about knocking on so many doors or finding which path to take, just focus on the opportunity that is before your eyes right now, that is to serve others through your field. I understood the wise words of the mu'aleem, the shortest way to the Lord is through khidma (service). So serve right there where you are. Because He is so near, we tend to not see.

I think the best antidote when the vision gets fuzzy is to reflect upon a verse of the Quran:
"We will show them Our signs in the horizons and in their own souls until it becomes clear to them it is the truth. Is it not sufficient that your Lord is witness to all things?"

So let's keep looking out for His signs until it becomes clearer.
On a lighter note, that's why lately, I'd like to take it easy and love going to the beach to enjoy the horizons, laze on a hammock and contemplate on my own soul.
LOL

But on a serious note, whenever my mother calls on me for a favor I take it as my ticket to Heaven. Likewise, you, whenever someone seeks your medical service, consider it your shortest route to Him. If you happen to have the time to visit some majlis ta'alim, or you don't, so be it. Should we bump into something that doesn't seem right to our heart, we say next! Because it is sufficient that He is our witness to all things.