Yes, I said my goodbyes...but...last nite I learned an important lesson that should be recorded here.


It is about a simple du'a taught by Prophet Muhammad salallah alaihi wasalam to Ummu Salamah. One respectable Malaysian dai'e Datuk Dr Zahazan made the audience repeat after him - a simple du'a which many might already know, perhaps many people have learned it from some books or websites, but perhaps some have heard about it but are yet to memorize it or practice it, but the mu'aleem imparted the lesson anyway and I for one appreciated it wholeheartedly.

From my experience, any selawat/durood or any du'a or awrad that I learned in person, especially at a mosque, it stays with me the longest time. Alhamdulillah. And this alone is sufficient to make me feel good that the Lord cares.

Of course, I would not have had the opportunity to attend the majlis taa'lim had it not been for my service towards my mother. It's true that being of service to one's mother would open doors to much great stuff. But first I must say thanks to the Lord for His generosities that I am able to be on long leave beginning from yesterday. Because I was on leave, I got to take my mother out for breakfast and do other things. On the way home, I detoured a bit to get mango juice from a vendor near our neighborhood mosque, cos my mom likes it a lot. Because of that small favor I did towards my mother, I saw a poster about the majlis taa'lim - so that's the asbab or the cause for a lesson I needed - about the importance of making supplications to the Most-Compassionate Creator.

That one could make a sincere du'a to the Lord for Him to replace a mishap/calamity/hardship with something better. Being sincere towards the Lord means you have full faith that He is in a position to create a better circumstance or any kind of excellent circumstances to please you, replacing negative experience(s) with an unexpected/unimaginable positive narrative(s).

It's worth taking the time to recall each and every negative situation you have experienced, articulate it to the Lord in detail (even though He already knew), acknowledge your ignorance and weaknesses during each of the situations and plead for a fresh new bounty in return.

The longer you live, chances are the more calamities you have experienced. Think about missed opportunities when you were schooling because you had neighbors who were jealous about your potentials, so they cast sihir and suddenly you became extremely lazy to go to school. Your psychological equilibrium got attacked. You started hallucinating and on most nights in your dreams you see yourself falling. That's what some people wanted of you. This is an example of a calamity, that you lost some precious time in trying to realize your full potential.

During your youth and adulthood, you fell into some bad influences, not that you are good and others are bad. But it is a fact that the environment, peers, acquaintances, all influence us. Think about what you could have been if you had positive people building you up instead of "blacksmiths" dragging you down.

These are all examples of calamities. They are "good" in the sense that the Lord will replace every single thing that had inconvenienced/harmed you, in fact, He might have replaced it without you realizing it. Regardless, you have today and every day to appeal so that He would replace all calamities in the form of losses, lost opportunities,  lost times, lost friendships/relationships, etc. with a reward/gift that is potentially 10 times better! Think about the prospects. The Almighty Allah is capable of devising a plot in your favor anytime as He wishes. All we need to do is ask:

Allahumma' ajurni
fi musibati
wa akhlif li
khairan minha
Let's rejoice and prepare ourselves to be a receptacle of His wondrous bounties.
And fret not when the level of our iman decreases cos that happens, said Datuk Dr Zahazan and whenever that happens, we should level up, by acquiring knowledge and practicing, and gearing up through remembrance and reflection through these four steps:
I am just doing myself a favor really. I learned it from him, I memorized and practiced what I learned, and I reflect on it (fikir) as I draft this posting.

May you benefit too. 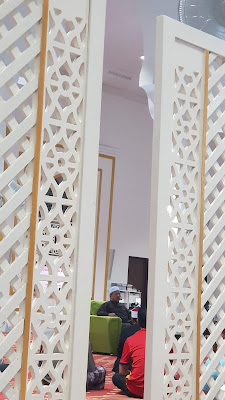 It was good to know that Datuk Dr Zahazan has been a trustworthy channel for people who are looking for ways to contribute to our fellow brothers and sisters in Syria for 7 years already. He said he never taxed people's contributions for admin charges etc. Just simple, no-nonsense kind of charity work.
Posted by E. Ismail No comments:
Email ThisBlogThis!Share to TwitterShare to FacebookShare to Pinterest
Newer Posts Older Posts Home
Subscribe to: Posts (Atom)