"Don't be sad. We have Prophet Muhammad as our leader!" - Habib Syech As-Seggaf at Masjid At-Taqwa, Kuching, Sarawak - 26 Jan 2020

To be frank, Solo has been on my mind for months. My love for the place and our devout brothers and sisters in Indonesia has grown significantly ever since I started following the live streams on  Nabawi TV YouTube channel. One major highlight from the many (many!) majlis taalim organized in Indonesia (particularly on Java island) was the event commemorating the life and death of Habib Ali bin Muhammad Al-Habshi (1259 - 1333 Hijri). He was a prominent Yemeni scholar who authored the famous Mawlid Simtud Duror. The annual event attracts thousands of people and is customarily held at Masjid Riyadh in Solo.

So, Solo has occupied a special place in my heart so that it gave me great pleasure to know that a contemporary gem of Solo, namely Habib Syech bin Abdul Qadir As-Seggaf was in Sarawak last weekend. Thanks to Brother Rudzaimer, an old friend of mine who shared recordings of the tausiyah on his Facebook.

OK let's hear it from Habib Syech As-Seggaf who is famous for his beautiful rendition of qasidah. It's no surprise that his tausiyah at Masjid At-Taqwa in Kuching Sarawak on 26 Jan 2020 was interspersed with stanzas of popular qasidah such as Ya Imam Ar Rusli and Bushra Lana. By the way, Habib Syech is widely and affectionately known in Malaysia as 'Habib Ya Hanana'.

"Qul in kuntum tuhibbu nallah, fat tabi 'uni yuhbib kumullah. Let it be known until the day of Qiyamah for those who wish to be loved by Allah...if you want to know who has won the love of Allah, look at his/her attitude towards Prophet Muhammad salallah alaihi wasalam. If the person does not offer selawat, does not follow the sunnah of the Prophet, and is not happy at the mention of the Prophet's name, the person shall not win the love of Allah! Verily, that's the key to love. The tariqah or path that is most rewarding is the path of love. Servitude that is devoid of love will not make one taste bliss."

"Ladies and gentlemen, you have come to this place with love. Last night on arrival at this city, I was amazed. I wasn't expecting such a warm welcome. I was tired from my journey but when I saw the love people showed, it evoked love in me. We tend to follow those who have much love in them."

"Let's consider the happenings around us ...al hubbu... [Habib Syech went on to recite a line from a qasidah by Imam Al Busiri]. Love tastes better when it is tested. How is it tested? Yes, it can be difficult and complicated at times. But it adds to the blissfulness. Some people come here and get caught in the rain, but they still come because of love. If you were to perform your ibadah with love, you would feel the enjoyment as did the scholars and the prophets. They performed solah with love. They were attentive in their solah. Delightful, even to those who witnessed it."

"Therefore, worship with love. Work, out of love. Life would not be as complete if love was absent from it. Love would give the feeling of gladness. Alhamdulillah."

"There are two types of love: minal muhibbin and minal muqarrabin meaning one who is near. There are people who may be close to us but they are not loved. For example, I have an acquaintance who travels every day in the same car as me, but I don't love him. He is close to me, we are in the same car but I might not share my food with him. Nor will I offer my money to him because I don't love him. He sends me a message every day. He is considered a muqarrabin, very close to me in the car."

"There might be someone outside of the car. He is not close to me but he is loved. Therefore, be grateful if you are one who is both near and loved. You are not only close to Allah, but you are also loved by Allah. That's amazing!"

"If you are beloved, even if you make small mistakes, Allah would cover it up. Bifadhlil, says Habib Ali. Fadhlil. You would receive a preference from Allah. Like a mother who carries her son. She carries him to a gathering and suddenly the boy wets his pants. Do you think the mother would abandon her baby boy? Or would she clean him instead? She would certainly wash her baby, smiling. Why? Because of love."

"The ummah of Prophet Muhammad might make mistakes. We are not referring to major sins here but we do make mistakes all the time. Between the Zohor and Asar prayers, there is kafarah. Between one Friday to the next Friday, there is kafarah. Between one day of fasting to the next, we are given a pardon by Allah. Why? Because of love. Because He loves the ummah of Prophet Muhammad. Therefore, be grateful, Alhamdulillah that we are his ummah."
[Habib Syech then sang a qasidah]

"The Prophet would say Ha ana laha...[as per one line in a qasidah]. All other Prophets would give up. Prophet Muhammad would be calling his people from Kuching, "come follow me", stand behind the banner behind Rasulullah. Imagine that!"

"How do we achieve that? By helping him Rasulullah. By making lots of sujud. By multiplying our ibadah. InshaAllah, we try. We are not perfect. Who is perfect among us? None! Who is able to make ibadah as much as Sheikh Abdul Qadir Al-Jilani? Who can perform ibadah like Imam Al-Attas the Sahibul Ratib? Who is able to match the ibadah made by Habib Abdullah bin Alawi Al-Haddad? Who can top the ibadah performed by Habib Ali of Batu Pahat, we just had an event honoring him yesterday."

"No, we can't. But there is one key that could make us belong with them. What is it? It's love! Mahhabah as we have described it."

"Only Prophet Muhammad could say that. The first to enter the Heavens would be his ummah. Rasulullah will not enter the Heavens until all of his ummah have entered the Heavens. That's how great the Prophet is. Therefore, O people, don't you be stingy in offering selawat to the Prophet. You should make at least 100 selawat daily.


"I received ijazah from Habib Abdullah bin Hamid Al-Attas Al-Habshi from Makkah who said: 'O son, recite this as did my father, as did my father's father, up to Rasulullah salallah alaihi wasalam. Recite selawat dhomir:


"Practice this after Subuh and after Maghrib. It's light, easy and quick. The reward is huge. I hereby grant all of you the same ijazah. Recite at the minimum 100 times. It would be better to recite 1000 a day. Increase it to 10,000 on Fridays. Make it a habit to recite selawat continually."

"Likewise Prophet Muhammad. Every single day we send him selawat. If we were to deliver 1000 messages, he would remember us. There is an angel who would update him salallah alaihi wasalam: "Fulan bin Fulan or Fulanah binti Fulan sends selawat to you O Prophet." So the Prophet would in Qiyamah, remember the names that got mentioned the most. "Come on in!" he would say.

"Don't be sad, O people. We will surely leave this world. Do not quarrel, don't argue about worldly issues. This world is small. This world as described by Prophet Muhammad is like wings of a mosquito. Mosquitos are insignificant. I am not saying we should abandon the world. We may use the world as an instrument to make us reach the akhirah in a good manner. Look for abundance. Give away plenty. Look for abundance. Relieve the burdens of people at large." 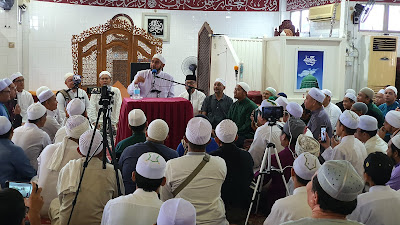 ***
Allahu a'lam. May I be forgiven for any omissions/errors.

Pray Allah would be kind to let me be present at Habib Ali bin Muhammad Al-Habshi's '109th Haul' in Solo, scheduled at the end of 2020. And anybody else who might be wishing to attend. Aamin.

Until then, Solo on my mind.