What do we complain? | What the Prophet complained?

If I dare complain to the Lord, I complain that He didn't let us live during the times of the Prophet s.a.w. Imagine if he were to live among us, we would have a definite source of reference, a trustworthy and approachable counsellor who could clear any doubts we might have. He would be all that and so much more. We could just make a short trip to meet him in person knowing that he will never let us down, no protocol whatsoever. We will never ever feel helpless.
Yes we may still visit the Prophet s.a.w now. We may greet him. We may even get other people to convey our salam to him. A close friend of mine just did that for me today. Alhamdulillah. May Allah bless her for it means the world to me.
Now what do we complain to the Lord? What did he complain to the Lord? Did you know?

You will cry like I did if you heard the things the Prophet (s.a.w) complained to the Lord, as narrated by Habib Umar in this lachrymose clip. 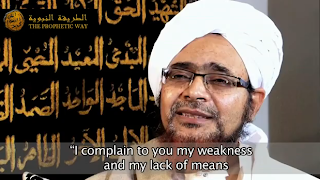 http://www.youtube.com/watch?v=lZKFbYgdMGw&feature=player_embedded
Allah...I needed those tears to end the drought in my heart. It's amazing the effect the Prophet s.a.w could have on us. Sallu 'alan Nabi!

He, peace be upon him, had his feet injured. People threw stones at him making his feet bleed badly that he had to stop three times, and finally upon reaching a tree, he stopped to complain to the Lord. But he didn't complain to the Lord about the bad treatment he received from the Taif or Makkah people, or about the stoning, no! He (s.a.w) said:
"I complain to You my lack of weakness
and my lack of means
and my weakness in front of people.
You are the Lord of the Oppressed,
who will You leave me to?"

And when he was offered a chance for redemption, he could have accepted it, he could get those people crushed by the mountains, but no! Instead he said: "I wish that God will bring forth from their loins those who will take on this affair."

Habib Umar said, those people were not his friends for him to make such a good prayer. They showed enmity towards him, yet he prayed for them like he would for his children and friends.