The psychology of prayers


We are approaching the end of the solar year. Let's take stock of the prayers we should have performed in a given year. If I may ask, what were you thinking as you performed the 1,825 obligatory salat in a year, that is if you are a man? And probably around 1,741 salat, if you are a woman.
What was I thinking? Well...I am now thinking about how I have prayed, how many times I have prayed, how many times I was late in my prayer, how many times I have missed my prayer. I, I, I it's all about me. That's where I went wrong. That, I discovered just last night, upon watching a video of Shaykh Muhammad bin Yahya al-Ninowy giving tausiyah at a masjid in Singapore last weekend.
He was talking about ihsan - that you worship Allah as if you see Him. The shaykh stressed the importance of realizing the object of one's prayer which is Him; Him; Him and not you. He said, "it's about seeing Him, not seeing you, not seeing your ibadah, your qiyam, etc. but seeing Him. If you see you, how can you see Him?" 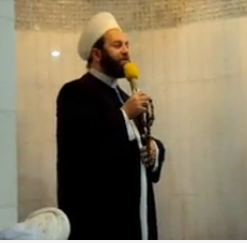 Astaghfirullah!
About 20 hours ago, I noticed Sidi Farraz Rabbani tweeting on the same point. He said:
'In prayer, some focus on praying;
others, on praying to God;
others, on God.
"Establish prayer in My Remembrance." [Qur'an]'
Yes indeed, Allah says in the Qur'an: "Establish prayer to remember Me." Yet so many of us are remembering 'me', in our prayer.
Later, Farraz Rabbani tweeted again to emphasize the point. He said, "The highest sincerity is to forget yourself in beholding Him."
Allahu Akbar. Hence, I am reminded of this weighty phrase I learned from somewhere:
La ilaha ilAllah qabla kulli ahada
La ilaha ilAllah baqda kulli ahada
La ilaha ilAllah hu yabqa Rabbana
wayafna kullu ahada


There is no God but Allah before and after everything, while Allah is baqa (everlasting) and everything else is perished.
And Shaykh Ninowy ended his tausiyah on ihsan by quoting the Qur'anic phrase:
kullu man alaiha faan
"All that is on earth will perish."
So let's think about it. Let's make our 1,825 +/- prayers next year be how it should be InshAllah. May Allah forgive us for not worshipping Him as He should be worshipped.
__________________________________________
Listen to Shaykh Ninowy's tausiyah by clicking on the link below,
courtesy of Masjid Ba'lawi Singapore
http://www.facebook.com/video/video.php?v=10150421672102732
Posted by E. Ismail
Email ThisBlogThis!Share to TwitterShare to FacebookShare to Pinterest