The notes below are not verbatim, sketchy at best.

The esteemed Habib said:
Praise be to Allah that we have been honored to be present at such a majlis. He has permitted us to benefit from the bounties which are well kept in a treasure box, the contents of which shall never diminish. Praise be to Allah for allowing us to do some good amal in our fleeting age, to be doing something that will last for eternity. A business that will last eternally is that of akhirah. There is a vast difference between a worldly business and business of the hereafter. All that was said earlier [in reference to the tausiyah given by other shukuyh/habaib at the majlis] as a result of a close connection with Allah. We have a connection with Allah on account of the blessings of the Prophet salallah alaihi wasalam. He is the one who has brought us out of the darkness. He brought with him the light of Islam and the light of wisdom. And Allah has purified us from the dirt of polytheism; from being oppressive towards one another; and from committing grave sins. We call upon Allah to send His salutations to the greatest of all blessings which is Prophet Muhammad salallah alaihi wasalam, his noble families, those who love him and are close to him.

You are present at this majlis. Do you know who is it that gathers you here? Who gave you the tawfiq to be here? Is it because of your legs? Or your other limbs? Is it because you have a car? Or what else? Those are merely asbab [causes]. None of you can be present here if not for the tawfiq granted by Allah for you to be present here. Be grateful to Allah for the tawfiq. There are many people who live in heedlessness. What do you reckon the deed you did which earned you this tawfiq from Allah? Allah grants you tawfiq as proof of His love for you. If Allah loathes a person, He sends him/her to places/acts/people that which He hates. But Allah has chosen to send you to His House [this masjid]. When a person goes to someone's house, do you think the host will not honor his/her guests? Do you think by coming to the House of Allah, He will not honor you? Verily He honors you by enabling you to make zikir. That's a blessing. Whoever mentions and remembers Him, He would reciprocate in a better manner. He gives us the tawfiq to recite salawat. Indeed the best person whom we should love is none other than Prophet Muhammad salallah alaihi wasalam. He Himself rewards those who make salutations on His prophet.

Take notice of the rewards Allah chooses for those whom He loves. Accept His bounties. Whoever thinks the reward he/she receives from makhluk is great, the person ought to know that the reward from Allah is even greater. When Allah grants profit to the business of akhirah, the heart would feel peaceful, the soul would be in a tranquil state, the mind and the batin would be cleansed, and be blessed with high stature. Try to understand these realities from Allah. It is different from the understanding of the ordinary folks. Heed the lessons from the story of Aishah radhiallahu anha giving away all parts of a lamb leaving behind its forelegs for the Prophet. In reality, what has been gained is actually those that were given away.

Those who are present at this majlis has reaped a great profit. Those who are absent would regret it. Even if he owns a country, if he's not present at such a blissful event he would regret it. The pride and joy of ruling a country would be lost and is incomparable to being present at such majlis even if it be for a moment. We learn from the Quran that on the day of Resurrection, we would be willing to sacrifice our wives and children in exchange for safety. We learn from the Prophet about the phrase which he loves more than anything i.e. subhanallah walhamdulillah wa lailahaillallah allahu akbar. We recited that just now.

And there is this story about Prophet Sulaiman radhiallahu anhu who is blessed with wonderful capabilities. Once, a man felt amazed at seeing him fly in the air. He uttered: "Subhanallah, indeed Sulaiman has been conferred with great powers." When Prophet Sulaiman heard that, he actually stopped and went to see the man to acknowledge him for the tasbih he recited.

Know that being here in this majlis is worth much more than the world and its contents. Make your heart and mind present to listen to the words of Allah. People listen to all kinds of things. But few make it a point to listen to that which is beneficial to them. Open your heart and listen to Allah, listen to His words, He is the Lord of all and everything, listen and may you attain Al-Husna. It's not possible for anyone whom Allah has raised up to fall and be dishonored. Find the ways and means to listen to good words so that you would earn a good stature in the eyes of Allah. Anything that comes from Allah is haq, truthful and good. Only ahlul albab would be cognizant of this fact. Those who may be blind in this dunya, but are able to see the lights of iman, they are in truth not blind. Those who are blind in akhirah are those who do not believe in Prophet Muhammad salallah alaihi wasalam. The eyes of their hearts are blind here in this dunya and they will remain blind in akhirah.

Habib Umar ended his tausiyah with a lengthy and meaningful du'a so that those present would take home plenty of benefits and so that Allah would increase His tawfiq unto all. Habib Umar also granted the ijazah to recite la ilaha illallah al malikul haqqul mubin 100 times daily. 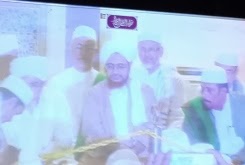 Allahu a'lam.
May I be forgiven for any errors and omissions.