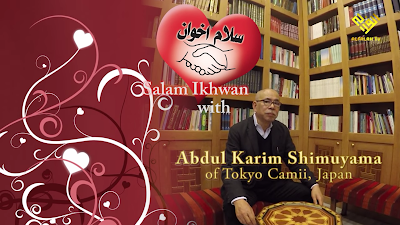 
Hope you'll enjoy watching this video as much I had enjoyed meeting and talking to Brother Abdul Karim Shimuyama, a staff of Tokyo Camii.

When I arrived at the entrance of the mosque, I noticed brother Abdul Karim and his colleague greeting each of the passerby (Japanese non-Muslims) inviting them to enter the mosque.

It's a simple approach of dakwah, yet significant. If I were one of the disinterested busy Japanese who often pass by the mosque, I might one day decide to step in, and that move could be life-changing, by the will of Allah.

Tokyo Camii is the largest of a total of 80 mosques in Japan. Quietly nestled in a neighborhood in Shibuya, Tokyo Camii's presence is vital as it represents the faith of some 10,000 Japanese Muslims.

Allah grants hidayah and success to whomever He chooses. I think I speak for many when I say Japanese is a nation with good akhlak (characters), let's just hope true faith will follow suit. I also think Japanese people have become patient and compassionate on account of the challenges they have had to endure - rebuilding Hiroshima and Nagasaki, rebuilding tsunami-stricken Sendai to name but two. And the fact that the country remains prone to earthquakes and volcanic eruptions.

Despite all the pains from the past and the unsettling geographical risks, Japan is one nation who is always quick to offer assistance to other countries in times of need.