Would I worship that which I do not see? - Sayyidina Ali bin Abi Talib 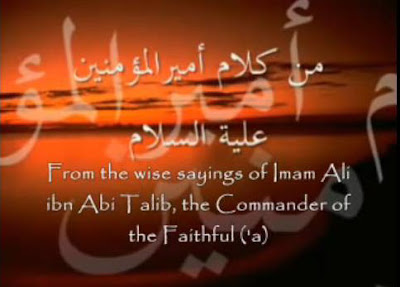 Sayyidina Ali bin Abi Talib alayhisalam:
Among the things he has stated
when Dhi'lib al Yamani had asked him:
"Have you seen your Lord, O commander of the faithful?"
So he replied, "Would I worship that which I do not see?"
So Dhi'lib asked, "How do you see Him?"
So Imam Ali said:
"Woe unto you O Dhi'lib, eyes do not see Him with a direct witnessing but hearts perceive Him through the realities of authentic belief.
He is known through the evidence that points to Him.
He is described by indications.
He cannot be compared to human beings.
And He cannot be perceived by the senses.
O Dhi'lib,
My Lord is near to all things without physically touching them.
He is distant from them without being separated.
He speaks but without the need for reflection.
He is manifest but not physically.
He has made Himself evident but without allowing direct vision.
He is separated but not through distance.
He is close but without sacrificing His exaltedness.
He wills but without aspiration.
He molds but without the assistance of limbs.
He attains but not through deceit.
He is subtle but cannot be said to be concealed.
He is great but cannot be said to be arrogant.
He is grand in His grandeur.
He cannot be described as having a sizeable magnitude.
He is majestical in His splendor.
He cannot be described as massive.
He hears but cannot be said to use the organ of hearing.
He sees but cannot be attributed to the sense of sight.
He is merciful but cannot be said to have a weakness of the heart.
He was before all things so that nothing can be said to be before Him.
And He is after all things so "after" is not said of anything after Him.
He is within all things without being merged with them.
And also without being separated from them.
He exists but without the need to come into existence.
He acts without compulsion.
He determines but without the need for movement.
Places do not contain Him.
He is not contained within time.
Attributes do not define Him with due respect.
The need for slumber never affects Him.
His existence precedes time itself.
His being precedes non-existence.
His eternalness precedes all beginnings.
He was Lord before there was anything to be Lord of.
And He was God before there was anything to be God of.
He was known before there was anything to be known.
He was hearing before there was anything to be heard.
Faces surrender before His grandeur.
Hearts tremble exceedingly out of fear of Him.
Souls strive desperately to attain His full satisfaction.