Be the source of security for everyone - Habib Umar bin Hafiz 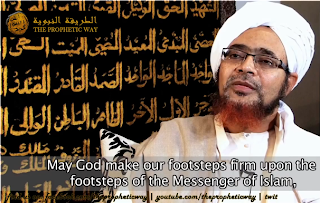 
Ameen to the venerable Habib's du'a - "May God make our footsteps firm upon the fooststeps of the Messenger of Islam."
Alhamdulillah wa shukrulillah for the presence of the inheritors of the Prophet among us, amidst this unstable world we live in where our iman and safety get threatened every now and then. Being weaklings that we are, we are susceptible to many external harmful effects. I for one have not been feeling safe lately. But alhamdulillah watching Habib Umar's video published by the Prophetic Way was like being given some cool mineral water and the fears and restlessness simply got flushed away.
When the goings get fuzzy it's best to go back to the basics as succintly and eloquently explained by Habib Umar (may Allah make us listen and obey him).
Are we the source of security and safety to other people? Or do we cause harm to other people? He said we should be spreading peace not just through greetings of Salam. "Peace necessitates that people are safe from your tongue, your hand and your eye. Do not be treacherous to people with your eyes, nor with your hearing, nor with your tongue. Nor with a hand that you extend towards their wealth and their honor." He said, if we could do all these then we will have realised FAITH.
It makes me wonder, how could people who appear to be learned, to be following sunnah with their beard and what not, at the same time be a source of harm to other people? How can a believer be oblivious to his religion by acting in the way that is harmful to other people? Perhaps we have all forgotten or become ignorant of the meaning of faith?
The realities of faith according to Habib Umar are that "people don't fear that you will wrongfully take from them, that you will harm or transgress them. The Muslim as the Prophet s.a.w said: is the one from whose tongue and hand the Muslims are safe. He is the source of security for everyone."
I think if you cannot do good to other people then at least just leave them alone. If you don't, you might just lose your faith and be a Muslim only by name.
May Allah grant us continued tawfiq. May Allah make us benefit from the wisdom of the habaib.
Ameen.