What would the wall of my faith look like when I am being taken by the Supreme Creator? What would yours look like?

Ramadhan has just left us. It's quite likely and hopefully our faith is pretty well cemented and sturdy. But I am somewhat disturbed as I think about my wall of faith because one of my aunt has just passed away rather unexpectedly. But then again all deaths are unexpected, we cannot fathom at what stage of construction our wall of faith would be when we go. How tall might it be? How strong?

Another reason why I am thinking about my wall of faith is because it's very disheartening when we try to build something solid, there is always someone who keeps swinging the hammer against our wall. And it's absurd because they do that quite consciously as they put in continuous effort to strengthen their own walls. How selfish and so not responsible. We are supposed to be reinforcing one another's wall. But people have the tendency to be self centered, they want to keep their cake but eat other people's cakes.

I may be a little discouraged about this but I am grateful because today I discovered an Arab who did not know any habib or shaykh. We are talking about an Arab living in an Arab country mashaAllah. So let's count our blessings.

By the way, my aunt married my uncle when she was in her mid-40s. My uncle was in his early 50s. They got married at the age when most people had written-off their chance for marriage. But God in His Mercy gifted them with a son when people thought it was impossible for her to have a baby at such a late age. Yesterday she died on her son's lap, at home, while they were having their regular bonding session, just the two of them.

She was perhaps just laying another brick on her wall of faith, building it in the fashion that the Lord had wanted it for her. That she should build it just high enough until her son was about 15 years of age. That was one of the main purposes of her wall and Allah knows best. Each of our handiwork is unique and exclusive as He wants it to be. As our Creator and the creator of our actions, Allah wants us to construct a purpose-built structure in the short time that He lends us.

Verily, we are all nothing but a builder of faith. At the end of the day we'll have to report to the Supreme Architect, Allah Azza wa Jala. And hopefully we'll not be among those who'd be questioned for trying to break someone else's wall. 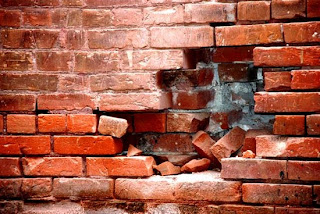