Habib Umar bin Hamid al-Jailani was one of the guests of honor at Masjid Muadz bin Jabal last Friday. He graced the weekly majlis hosted by Darul Murtadza. His speech in Arabic was interpreted into Malay by Habib Ali Zaenal Abidin al-Hamid. Below is just a rough note of the tausiyah: 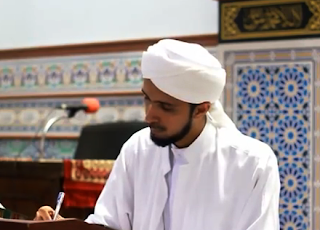 Praise be to Allah for His mercy, the One who continuously pours mercy day and night, to anyone wishing to reap His blessings and gifts. More so for us who are sitting here in one of His houses. Allah orders us to elevate and honor His house, by making zikir and tasbih, glorifying Him. Those who are seated in a masjid, are not made heedless due to their businesses. They are not careless about making solat and giving zakat. They are those who are fearful of the Day of Qiyamah (Judgement Day) when all hearts would be in the utmost fright towards Allah.

This place is called a house of Allah. It is a sacred place due to its connection to Allah. People who come to this place are considered to be visiting Allah. The Prophet salallah alaihi wasalam said so, that a masjid is a house of Allah and it is only becoming for the One who is visited to welcome and honor His visitors. May Allah welcome us as His visitors and offer us a great feast. May Allah fulfill our wish, make us close to Him and reward us with a gift that would be beneficial in this world and in the hereafter. You are fortunate to be here in the house of Allah, to make sujud to Allah, to make du'a in this house of Allah. Allah commands the Prophet to say this about Him: "If anyone were to inquire: Say I am near and that I will answer the prayers of anyone who asks from Me".

Prophet Muhammad salallah alaihi wasalam mentioned the benefits of being in a masjid. He acknowledged people who are inclined towards masjid; people who patiently wait to perform solat in a masjid and people who perform solat in a masjid. Allah uplifts the value of masjid and as such people who are in it too. They who honor the house of Allah, will have their properties, children and families blessed in this world and so much more in akhirah. They will be among the seven groups of people who will be granted Allah's protection. Their hearts are attached to masjid, they love spending time (iktikaf) in a masjid and enjoy its tranquility. The condition of a Muslim when inside a masjid is like fish in the ocean. On the contrary, a munafik would feel restless being in a masjid.

As narrated in a hadith, Allah is proud of those who gather for the sake of remembering Him. He would boast about it to His angels. Those who are present here are indeed fortunate. Your actions are being witnessed by the angels. You have come here to seek knowledge. Know that every single creation including the fish would ask forgiveness for knowledge seekers. Many of you are youngsters interested in learning. Allah is proud of youngsters. There are two good things about you. Firstly: you are in a masjid. Secondly: you are a young person who performs acts of obedience to Allah. That is a sign that Allah protects you. This is an important fact because you will be the future generation.

Prophet Muhammad salallah alaihi wasalam had quite a number of sahabah who were in their youth. They learned hadith and went to jihad with him. Some of them were 30, 25, 20, 18 and even 13 years old. Some of the Prophet's young companions were Abdullah bin Abbas, Abdullah bin Umar, Abdullah bin Zubair, Abdullah bin Amr, Hassan, Hussain and Muadz bin Jabal. Among them was Saidina Ali who died when he was 30.

Muadz bin Jabal was still very young when he embraced Islam. He was described as a tall, fair and good looking man. He was always accompanying Rasulullah salallah alaihi wasalam. During the 10th Hijri year, he was asked by the Prophet to go to Yemen, to be the Prophet's representative, to be a mufti and teacher. Upon which, Muadz immediately obeyed and began his preparations. The Prophet's farewell message to him was this: "O Muadz, it might be that when you come back from Yemen, you will not see me again. When you return to Madinah and pass by my grave, do pay me a visit."

The Prophet's parting message to Muadz came true. Rasulullah had already passed away when Muadz came back from his mission in Yemen. Muadz was much loved by the Prophet. Rasulullah expressed his adoration towards Muadz in a well known hadith mahabbah. He said to the young man: "O Muadz, verily I love and adore you. Remember to recite this du'a each time after your prayer: Allahumma a'inni ala zikrika wa shukrika wa husni ibadatik"

The hadith is known as hadith mahabbah because it begins with the phrase of love. Habib Umar bin Hamid al-Jailani said, "I have heard this hadith from my teachers. As a token of my joy of being here at this place, I grant ijazah for the hadith to all present here. Indeed, I love you and adore you and I urge you not to forget this du'a upon doing your solat."

Rasulullah's fondness towards Muadz bin Jabal was evident. On sending him off to Yemen, the Prophet said a du'a for Muadz: "O Allah, protect Muadz from the front, from the back, right and left." And he salallah alaihi wasalam had actually walked with Muadz for about a mile before they finally parted ways. That much love and affection, he salallah alaihi wasalam had for Muadz bin Jabal. 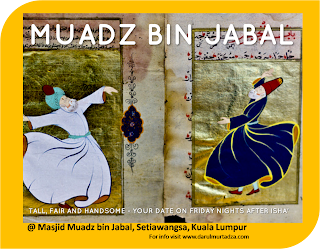