The honorable Shaykh, as many of us have learned from the news, was killed while lecturing in Masjid Al-Iman, Damascus, Syria. Innalillah wa inna ilaihi raji'un.


During his visit to Malaysia in November 2010, Shaykh Ramadan al-Buti gave a talk on the much debated subject of Daulah Islamiyah (Islamic state). He said we should make reference to the first generation of Muslims during the time of Rasulullah salallah alaihi wasalam and his companions. If we were to ask the sahabah if they were thinking about having a plan to establish Daulah Islamiyah, the answer would have been in the negative. The Prophet salallah alaihi wasalam and his companions had gone through much challenges in Makkah for 13 years. All they were occupied with was simply two things - to have faith in Rasulullah and the Quran kalamullah. They were engaged in jihad with themselves, fighting against their less desirable traits. When the Prophet salallah alaihi wasalam migrated from Makkah to Madinah, he did not migrate with a specific purpose of forming Daulah Islamiyah. His mission was for makrifatullah. It was for the solidifying of the understanding of being a servant of Allah, of truly understanding the hukm (commands) of Allah. True, Madinah turned out to be a Daulah Islamiyah, but we should note that it was in fact a gift from Allah to the Prophet and his companions for the hardships that they had to go through prior to their migration. Allah is fair in His reckoning. As stated in the Quran, Allah promises the believers He would make them khalifah. Allah rewarded the companions with khilafah (government) which is both a responsibility (wazifah) and a gift (hadiah). If we were to ask the pioneer caliphates, Saidina Abu Bakar, Saidina Umar, Saidina Usman and Saidina Ali - if they had been hoping to become a caliph, they would have denied and rejected such a notion. What about us who are considering, contemplating on this idea of Daulah Islamiyah, let's ask ourselves, are we not heedless of the deen? Are we not careless about the affairs of our societies? How can we form an Islamic caliphate when we ourselves are groping for answers, like searching for a lost thing, looking here and there? So let us look at the first generation. They were primarily concerned about hakikat ubudiyah (the realities of servitude)."

"I would like to remind myself, my children, my family and my friends, of two things: amal ma'ruf nahi munkar (to enjoin the good and forbid evil); and to remind people about Allah and to evoke the feeling of qashyah/qashyatillah (fear of Allah) among people."

"We talk about the possibilities of setting up a Daulah Islamiyah, but consider the state of the ummah these days. There are so many mahzab (sects), we are divided in our thoughts, we are fighting one another, we are dispersed in so many directions to the North, South, East and West. How do we solve this? We are looking for a covering like a lid but the container for us to close is not even there. What is more important is for us to fully embrace ubudiyah and ibadah. Although we must understand there is a difference between the two. Is it the same if we were to tie a fruit and hang it in the tree? Ibadah albeit an obligation is not the same as ubudiyah. Ubudiyah would bear the fruits of qashyatillah (fear of Allah) and mahabatullah (love of Allah). Verily, the command fafirru ilallah (return to Allah) is true. Yes we may have performed solat, siyaam and hajj. But we still end up eating and doing the haram. We perform ibadah but do not seem to have a connection with Allah. Once again I reiterate the importance of tahkik ibadah and ubudiyyah, this is the reality, this was what the sahabah had practised at the very start."

"I promise you, but it is actually Allah who makes the promise and that Allah never break a promise. Do we really need to have Daulah Islamiyah? In truth, we must actualize Daulah Islamiyah in ourselves, in our families and as a united ummah. Can we do that? No we cannot because there are plenty of problems. The real purpose is actually to seek the pleasures [redha] of Allah. If we can do this, a daulah may come to be spontaneously without a conscious effort made on our part. This was the approach taken by the Prophet. But we are burdened with wanting to have a manhaj, a system, a markaz, a constitution. It is easy, but what is more critical is the essence of Daulah Islamiyah itself."

"Islam is not a religion that divides. It is one which connects. But the problem is whenever we say anything about Islam, it is the Muslims who would challenge it. Think about God's commandments. Let's ask ourselves, have we truly and fully fulfill Allah's commands? One example is on the issue of women's rights. The reality is that many societies and nations are still male-centric. If we must, we should then build a Daulah Islamiyah on the right foundation. Else, it will just be a false slogan. It will deviate from its true reality."

"As a da'ie I am always thinking how to address an audience. How to give da'wah to people, how to make people aware and give mau'izzah [admonition] because there are all sorts of people with all kinds of problems in a crowd. There are many people who are lost out there. I'll be asked. We are responsible. But there are people among us [dai'e] who call out to people [da'wah] out of their lower nafs. They call people to Islam with an intention to divide them for the sake of assabiyah [for selfish reasons/ for the sake of their own group with exclusive interest]. How then can we form a Daulah Islamiyah?"

"As a Muslim, being here, I am obliged to spread da'wah, to enjoin people to good and forbid evil especially to those who have transgressed. It is my responsibility. Some people out there think they are not able to do it [da'wah] that they don't have the qudrah [strength] and they are apologetic about it. That is not right. God has asked us to call on people with hikmah. You are saying you cannot do da'wah but on the other hand you can do lots of other things. The Prophet said, when you see someone who is stingy, who follows his nafs and who takes pride in his own views, you must hold on to yourself and those near you and leave the others - khassah nafsi - what is meant by that is that we must take care and be responsible for ourselves and fulfill our duties towards our families. Can you do that? I see many people who can talk on grand subjects such as Daulah Islamiyah and yet their children/families are not under control and stray from the teachings of Islam. They are responsible for it. The Prophet said we must be responsible for our families. We are actually responsible to establish Daulah Islamiyah in our own house. If everyone could do this, collectively it would be like a creek flowing into rivers forming big streams."

"This is my final message on Daulah Islamiyah and the challenges surrounding it. If we think we are weak in handling the current issues, not knowing how to deal with the present situation with so many people deviating, then consider overcoming the challenges in our own homes. My answer [to this topic] is: the door is open. The door to return to Allah is open. The door to ask for His mercy is open. We should not just busy ourselves with fiery public talks. Each of us has a private time. We can devote a special time at night to appeal to Allah with regard to the state of ummah. We should be making more zikir when we are faced with overwhelming challenges. There is a hadith on this reminding us to make zikrullah when we have people challenging us. If we could do this, things will become easy. What is more important is to ask for tawfik from Allah in fulfilling the obligatory; in makrifatullah; and actualize the state of ubudiyah. For any problems we have, we should present it to Allah. I have confidence it is not difficult, it will end because the door to return to Allah is open."

"There is one prominent ulama by the name of Sayyid Ahmad ar-Rifai'e, in his kitab Burhan al Mu'ayyad, said: 'There are so many doors of Allah where people flock to. But I found a door called tazzalul which is humbling oneself to Allah. This door is empty, and I chose this door.' And with that he became successful in life. So let us appeal to Allah. Have confidence He will grant. I pray so that we belong with those who listen to good advice and follow Allah's command." 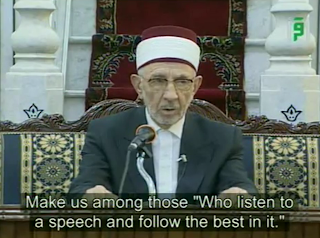 ___________________
An acquaintance of mine, Sidi Allie Khalfe remembered hearing Shaykh Ramadan al-Buti's remarks when he was asked about all the students kissing his hand. The shaykh said: "I am filled with dirt inside me which they do not see. They see my outside and see me as beautiful. Only Allah sees my sins." And he cried.
___________________
We would be blessed, if we were destined to die in a masjid, in the house of Allah, and die while seeking knowledge. Immensely blessed was Shaykh Ramadan al-Buti who must have spent most of his life in servitude and in teaching the religion for the sake of Allah and Rasulullah. And died a martyr.
___________________

The above paragraphs were quoted from this video of the shaykh's lecture in Malaysia:
http://www.youtube.com/watch?feature=player_embedded&v=rY0pAiu5jmE