Final leg | Ten to the power of eighteen

How are you feeling now that we are in the final leg of our journey in 2015? I have been busy in the kitchen just now, no... no... not cooking, just cutting some fruits, made sandwiches and hot choc for me and mom. Alhamdulillah for the opportunity to do khidmah to my mother.

Prior to preparing dinner, I thought of scribbling something just because someone had left a kind comment for the posting on Shaykh Omar Basheer. Someone from the 2009-Readers' Club, those who have been reading since the year 2009. Perhaps when my projects materialize and my businesses take off successfully in 2016, I should host a high tea at my Penang home for the entire clan of Shaykh Omar Basheer al-Khalidi insha Allah. Therefore, you all should pray for my success ok?

I saw this tweet by Shaykh Hamza Yusuf today. It's a quote of his during his talk at the RIS Convention in Toronto Canada held between 25th to 27th Dec 2015. RIS stands for Reviving the Islamic Spirit. Shaykh Hamza said:
'When you are oppressed, people attack and harm you. What is the response of our Prophet (salallah alaihi wasalam)? Return a wrong with a right.'

Hmm...you think you could do that? RAW WAR - return a wrong with a right? Not me, not easy for me, I'll be frank with you, no, no, no. I may have completed 7,000 salawat by now as part of the 10K-salawat challenge for this wonderful month of Rabiul Awal as recommended by the honorable Habib Umar bin Hafiz, but I am not sure I could do that - RAW WAR.

What if we were to die say in Dec 2016? Surely we would want to chart the months, the days, the hours in 2016 very carefully and meaningfully, won't we? On top of having a RAW WAR approach, we must be mindful of "spiritual ants" [to borrow a term coined by Shaykh Ninowy at one of his talks I attended.] And we must be mindful of people whose life long quest is to bluff their way, people who stunt our growth.

Hmm...something to think about. We have got another two days left to pick a fight in 2015. LOL.

Anyway, I am hoping in 2016 Exa Publishing could live up to its name Exa, meaning 10 to the power of 18. That's a khadam at Exa Publishing posing in front of a custom made poster she designed. 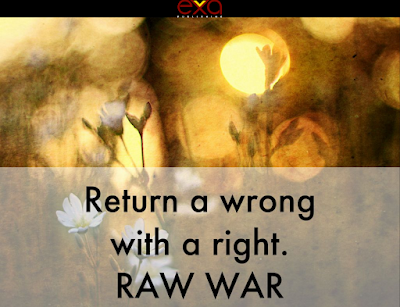