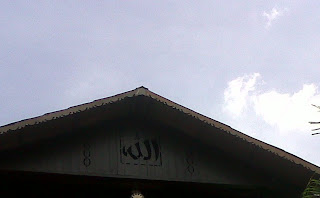 Dr. Habib Ahmad al-Kaf requested that those present at the majlis zikr today to take home and share its nur and barakah with family and friends.

The majlis was held at a beautiful abode belonging to Sister Ina & Brother Ben - a venue also known as KL Ba'alawi. Habib Ahmad al-Kaf of Indonesia is from Pesantren Hikmatun Nur in East Jakarta. Pesantren is an Indonesian word for a complex where the religious school(s) and students' accommodation for hafiz and orphans are housed.

"It is already written in Luh Mahfuz (the Preserved Tablet) that each one of you will be gathered here at this Majlis Rasulullah. We are here because we want to be near to Allah. This is the most honorable type of events on earth or in the hereafter. It is a majlis that wins His pleasure. May Allah forgive all of us. May Allah fulfill all our hajat. You know Mekah was a place for the jahiliyyah (the ignorants) but it was honored after the birth of  Rasulullah s.a.w. Allah honors a place for the sake of His Beloved. Most of you have waited quite a while for the majlis to start. May Allah give you many benefits from your patience in sitting at a majlis such as this."

"Let's sing the Qasidah Burdah. I never memorized the Burdah until I kept the company of Abuya (Almarhum Sayyid Muhammad bin Alawi al-Maliki). Actually, I wanted to speak about another subject but I am reminded of Abuya and him being so keen on the Burdah when I saw his picture (pointing at Abuya's photo in the room). Each time before Abuya gave lectures, he would recite the Burdah. Abuya said that it was an effective way to guard himself against whisperings of the shayatin telling the mu'aleem how good he is hence inciting ujub (pride) in his heart. By remembering the Prophet, by reciting qasidah and giving tribute to the Prophet from whom all knowledge is drawn, we protect ourselves from pride.

"Mind you", said Habib Ahmad al-Kaf, "Imam al-Busiri was paralyzed when he authored the Burdah, yet he did not wish to be cured. He wrote it purely for the love of Allah and Rasulullah s.a.w. We, on the contrary, if we were ill and handicapped, we would be praying and doing whatever we could to be cured. But al-Busiri despite his weaknesses had made full use of his heart and brain to pen such lovely words in praise of Rasulullah s.a.w.

The Prophet deserves to be lauded in the manner Qasidah Burdah was composed. His teachings is timeless. All doctors today whether they realize it or not, they all learned from the Prophet - that all illnesses come from the stomach, that we should eat only when we are hungry and when we eat we should not eat too much. But most people today live to eat, like animals. Only a few of us eat to live. The Prophet has set the foundations to pertinent knowledge, so he must be recognized appropriately. People are given recognition for scientific discoveries, this and that. Their discoveries are actually rooted in the Qur'an and the Prophet, yet they are given great titles and awards for their so-called intelligence. The Prophet certainly deserves even greater recognition. He has also taught us the best practice in commerce. He taught us amanah (trustworthy). He was Al-Amin. Amanah has got to be the single most important factor for a sound economic/trading system. The knowledge that we take from him is but a small scoop from a vast ocean - gharfan minal bahri.

What is heaven on earth? Heaven is when you follow his akhlak (behaviors) and teachings. But there are people who take pleasure in dishonoring him. What do you think is the most hated thing by Allah? It is when you ridicule the one whom He loves! Prophet Muhammad is the beloved of Allah. Still there are people who question mawlid, salawat, majlis ilm and all other shi'ar Islam. Those are the shayatin. Syaitan is always waiting to tempt and misguide us. When you do not occupy yourself with zikrullah, when you detach yourself from Rasulullah, it will come sneaking and whisper into your heart - it is khannas. What does Allah say? He ask us to seek refuge "from the evil of the sneaking whisperer" (min sharril waswas sil khannas); "who whisper in the hearts of mankind" (Allazi yuwas wisu fi sudur rinnas); "of the jinn and man" (minal jinn nati wan nass). We cannot see the Jinn but we can see syaitan which is in the form of man. Beware of them. In form, they are man but in truth, they are syaitan. Those who go against the Prophet are noneother than syaitan. So we recite qasidah at the start of our majlis to chase the syaitan away. Shayatin in the form of jinn and man do not like you to be at majlis ilm because this is where you get to cleanse your heart and remove from it all heart related sickness. Attending such a majlis could soften your heart. Where else can you do that? At which majlis/gathering? But beware, there are many people who has plenty of knowledge, there are many ulama' nowadays, but their akhlak (behaviors) is poor!

Dr Habib Ahmad Al Kaf welcomes all to Pesantren Hikmatun Nur for a Mawlid in conjuction with the Pesantren's 7th anniversary on 25th May 2010, 8 a.m.@ Jln. Olahraga I, No. 11 RT 15 RW 05 Condet, Cililitan, East Jakarta, Indonesia.
Posted by E. Ismail
Email ThisBlogThis!Share to TwitterShare to FacebookShare to Pinterest