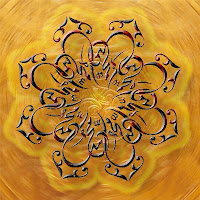 
A close friend of mine narrated this karamah story of Almarhum Habib Ali bin Jaafar al-Idrus.
Almarhum Sayyid Muhammad bin Alawi al-Hassani al-Maliki (Abuya) (1944 - 2004), a highly esteemed scholar and sufi of Makkah had just changed his phone number. His aides had not yet informed anyone of their guru's new contact number.
All of a sudden, the phone rang. Abuya was startled. He asked his aides if they had given the new number to anyone. They said no. Surprised, Abuya answered the phone call only to find out that  it was Habib Ali bin Jaafar al-Idrus!
Habib Ali had phoned Abuya inviting him to his house in Batu Pahat, Malaysia for a spiritual get together with some other blessed souls!
Wallahu a'lam.
May Allah shower eternal rahmah on such ruhul quddus.
Habib Ali bin Jaafar al-Idrus passed away yesterday, 13 May 2010/28 Jamadil Awal 1431 Hijri in Batu Pahat, Malaysia.
Read Lisan al-Din posting on Habib Ali bin Jaafar al-Idrus
Posted by E. Ismail
Email ThisBlogThis!Share to TwitterShare to FacebookShare to Pinterest