Show up | What to chase

I decided to try to show up here every day, InshaAllah. I realized there must be something positive to write every day, it need not be academic or "religious". There should be some positive words to send out. There must be something positive buried in a day even if sometimes it's clouded by negativities or if it gets deafening with noises. On some days we have to look harder for the good and the positive that take place on that day. But I think on most days, it's there, the good and the positive is clearly visible, thus we should acknowledge it.

I came across below sayings/Tweet by Vala Ashfar. It's a good reminder for us to rethink and recheck what is it that we chase after. Yes, of course, it would be better to chase education, happiness, joyful work and ways to help - ways to help ourselves and others.

Today is the 4th of January, let's be mindful of what we write on this page 4 of our 365-page book called Twenty Seventeen.

Ahh...I have Quran lesson today, YaHuuu!
Several years back, I made a conscious decision to say YaHuu when I'm happy, instead of Yippie etc. because that's a zikir - Ya Hu.

Did you know that our (Malaysia's) king decided to make his subjects say Allahu Akbar instead of Daulat Tuanku (a proclamation affirming the sacred power of the King). Because according to His Majesty, Sultan Muhammad V, saying Allahu Akbar would give the person/proclaimer more benefit than for him/her to say Daulat Tuanku.
Allahu Akbar!
May Allah grant the King a long, meaningful and prosperous life, and may we benefit from his wisdom and piety. Ameen. 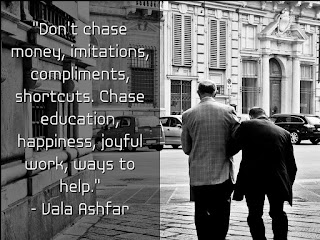