Many explanations have been made about the derivation of the word Sufism. The explanations closest to the truth are five:

First those who say that the term is derived from a piece of wool (sufah). The reason is that the Sufi vis-a-vis God is like a piece of wool tossed on the ground with neither will nor direction.

Second: the term is derived from the lock of hair on the nape of the neck (sufat al-qifa) because of its softness. The Sufi, like the lock of hair, has a soft and flexible nature.

Third: the term is derived from "attribute" (al-sifah). This is to say that the Sufi is characterized (ittasafa) by performing good deeds and turning away from bad qualities.

Fourth: the term is derived from purity (al-safa). Abu al-Fath al-Busti (may God have mercy on him) has confirmed this, going so far as to say: "People have argued and differed about the term 'Sufi'; some think it derived from wool (suf). I do not grant this name save to the noble person who dealt purely with God and was purified until he was called a Sufi."

Fifth: the term is derived from the Bench (al-suffah). For the Sufi has the same characteristics as the People of the Bench*, whom God has endowed with certain characteristics, saying of them: "They call upon their Lord at morning and evening desiring His countenance." (Qur'an 6:52) This is the origin to which every explanation of the word goes back. But God knows best! 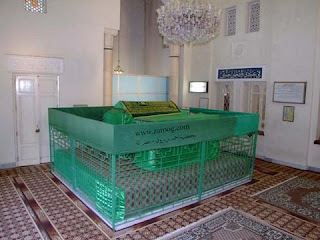 Note:
* People of the Bench refers to a group of Muhajirun (the generation of Muslims who immigrated with Prophet Muhammad s.a.w from Makkah to Madinah. They were later joined by other Muslims who settled in Madinah but had no dwelling place. They lodged in a corner of the mosque and lived on public charity. They spent their time performing various acts of worship.