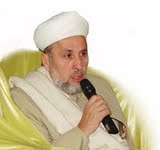 
O son, my heart is singing...oh what sweet joy to see Habib Yusuf again! He was at KL Ba'Alawi tonight. Also present were Baba Aziz and Shaykh Fahmi Zamzam. And you should have seen the glow on Shaykh Fahmi's face when he came into the room to greet Habib Yusuf. The ever charming Habib Yusuf was equally thrilled to see Shaykh Fahmi and so we witnessed the beauty of friendship and love among these righteous men.
When I arrived, he was speaking about the station attainable by a saint; that no one saint could match the siddiq-ness (truthfulness) of Sayyidina Abu Bakar as-Siddiq. It was said that he did not surpass anyone in knowledge or good deeds except for the degree of mahabbah (love) which he had for Rasulullah s.a.w.
The sign of the one who has mahabbah towards Allah, Habib Yusuf said, is reflected in his submission to Him. The Qur'an warns us not to object to what Allah has decreed for us.
An ariff was reported to have said: "there is no greater punishment for me than being veiled from Allah and there is no greater joy for me than wisal (arriving) at His presence."

According to Habib Yusuf, there is no value in desiring for heavens if one does not seek the One who owns the heavens. Rabiatul Adawiyah, the most notable Sufi woman saint who is well known for being indifferent towards heaven and hell, has said "O Allah, You could reward anyone You like with heaven and punish anyone You dislike with hell, but all I ask of You is just You."

Habib Yusuf said "if we truly understand the virtues of mahabbah we would also want to walk on the path of mahabbah. That is why the anbiya were never heedless of their breath. There was not one breath they breathed except that it was based on mahabbah. The only hurdle that hinders man from achieving mahabbatullah (the love of Allah) is his nafs ananiyah or I-ness. The haqiqat of mahabbatullah is to remove one's "self". This is achieved through mujahadatun nafs (the battle of the self).

(to be continued)
Read Part 2
Posted by E. Ismail
Email ThisBlogThis!Share to TwitterShare to FacebookShare to Pinterest