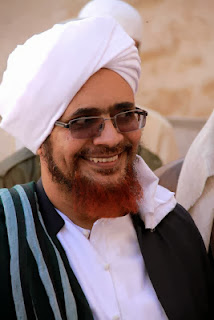 Correct me if I am wrong, the last time he was here was April 2012, but tormented hearts and thirsty souls feel like it was too many moons ago.

You may have heard about his upcoming visit from someone somewhere. I was informed by one akhi who loves the habaib and majlis zikr, mashaAllah, a respectful messenger of good news he is.

Here's a story about the venerable Habib Umar which I have borrowed, adapted and translated from an Indonesian brother, Sya'roni as-Samfuriy, as related by Habib Ahmad bin Muhammad al-Kaf to brother Sya'roni who wrote the story in his blog in November 2012 (15 Muharram 1434 Hijri). That's almost exactly a year ago, subhanallah.
http://biografiulamahabaib.blogspot.com/2012/11/kisah-kemuliaan-akhlak-al-habib-umar.html

****
It was in mid-April 1994, it was winter in Tarim, Hadramaut. We [a group of Indonesian students] were not used to the cold weather. Habib Umar spoiled us by providing expensive thick duvet/quilt for each one of us.

As usual, after Asar prayers, we headed for Tarim for classes (raudhah) and mawlid in that city. When the majlis was over we came back to Aidid town where Habib Umar lives. We usually finished very late into the night. At that time the habib had only one car so everybody would try to get a seat in his Nissan Patrol. Twenty people would cramp onto the vehicle. But that night we were the unlucky three who didn't make it. We didn't have any other choice but to walk to Habib Umar's house which was 5km away.

When we finally arrived at his residence, we saw our friends being given the new thick duvet. Again we were unlucky. There was not enough duvet for everyone, for three of us. We didn't get any because according to Habib Umar the shop didn't have any more stocks, not until the next day.

Just before we retired to our room empty-handed, Habib Umar asked us to wait. We saw him entering his house which was adjacent to our accommodation. He then came back to hand us with 3 large quilts and 2 small ones which were all worn-out. We accepted it gladly nonetheless.

As we were getting ready for bed, we heard cries from Habib Umar's house. A baby whom we thought must be sick was crying non-stop. It was the Habib's child who didn't stop crying right until dawn.

At Subuh we headed for prayers and nahu lesson at Masjid Aidid, which was located right in front of Habib Umar's house. Habib Umar himself gave us the nahu lesson. When the class was over we returned to our hostel. That's when we crossed paths with Habib Salim, Habib Umar's son who was then 6 years old. We took the opportunity to ask Habib Salim about the baby. He matter-of-factly informed us that the baby wasn't sick. "He must have been cold because we all slept without any blankets last night," said Habib Salim.

On hearing that, we rushed to our hostel with tears in our eyes. We quickly grabbed the worn-out quilts. We gave them back to Habib Umar. When we saw him, he was smiling unassumingly, he took them and let us have the brand new duvet which had just arrived from the store.

We returned to our hostel crying thinking how generous and kind-hearted Habib Umar was. In my heart, I whispered: "O Allah, in this time and age there exists a person with such a beautiful heart. Thank you, Allah, for letting me meet with such a person in this life of mine."

*****
MashaAllah, tabarakallah. May Allah grant us the opportunity to sit in Habib Umar's majlis again, soon, InshaAllah. And may we benefit from his words of advice and wisdom.

p/s
I earnestly pray with the barakah of habaib whom we admire and love, Allah would protect me and my family from fitnah, musibah, and bala'. Ameen
*****