It is no joke that Allah, Subhan is He, says just that in the Holy Qur'an.


This ignorant faqir was surprised to discover that ayat from Surah At Tariq (86:14) in an immensely profound book by the much revered Shaykh Dr Abdalqadir As-Sufi.

The Book of Safar, published by Madinah Press, contains six discourses of Shaykh Abdalqadir As-Sufi on the subject of safar or journey which, according to the shaykh, also relates to unveiling. The discourses were given between July to October 2008 at the Jumu'a Mosque of Cape Town.

Alhamdulillah wa shukrulillah, the book, in my opinion is utterly spiritual, so beautiful and lively that it has brought me to tears on a couple of occasions. It has deepened the longing to one day sit at the shaykh's feet, InshaAllah. Ameen.


"By Heaven with its cyclical systems
and the earth with its splitting seeds,
it is truly a Decisive Word.
It is no joke."

Shaykh Abdalqadir As-Sufi says, all these reveal that every thing in creation is moving, in action (safar). The reality of Allah's creations being in a mobile state so to speak, is also reflected in human nature. The shaykh quotes several verses where we learn about Prophet Adam being expelled from the Garden and his journey to the Earth; Prophet Nuh's journey on board his vessel; about Prophet Ibrahim and Lut being sent on a journey to a blessed land; about Prophet Yusuf's journeys through his family conflict; the journey of Prophet Musa adrift in the river; the journey of Prophet Yunus in the depth of the ocean; and last but not the least is the journeying to the Lord and meeting Him azza wa jalla, the supreme privilege accorded to the last Prophet Muhammad salallah alaihi wasalam.

Shaykh Abdalqadir As-Sufi concludes his discourse saying:
"So the point of this is that this is how existence is. It is itself a journey [safar] - but everything is on a journey, even the actual atoms. Everything is moving, everything is alive - everything!"

He is also of the view that for the Sufis, safar (going on a journey) is obligatory. "You were born to have knowledge of Allah subhanahu wata'ala and for this you must make the journey. You have to travel. Travel in the land. You have to see."

***
In the second discourse in The Book of Safar, the shaykh talks about two measurements of time i.e. Allah's time which is immeasurable really and the time of the universe that we know. The shaykh makes reference to  a verse in Surah al-Araf about the incident of Prophet Musa asking to see the Lord and Allah's manifesting Himself to the mountain and crushed it flat. That's when Allah says: "When Musa came to Our appointed time." So Allah's time, says the shaykh is verily His secret, it is the time that He has chosen. A true slave should be cognizant of this and strive to be in tune and in sync with Allah's time. We should not rush ahead of Allah's decree. The shaykh quotes a verse from Surah Taha [20:81] where Allah asks Prophet Musa: "Why have you hurried on ahead of your people, Musa?" And in another verse in Surah Taha [80:114], Allah reminds Prophet Muhammad salallah alihi wasalam: "Do not rush ahead with the Quran before its revelation to you is complete..."

Shaykh Abdalqadir As-Sufi says, the lesson here is that we should "connect the natural time to the time of destiny."

***
According to the shaykh, Safar alludes to unveiling. Usfiru means unveiling. Safar as in the journey is an unveiling of the Majesty and the Power of Allah. He ends the second discourse with an eye-opening and thought provoking conclusion - that a man should observe the hal (state) he is in, the in-time he is living in, thus he should not rush forward or pull back. If a man is not conscious of the state he is experiencing in a given moment that would tantamount to being ignorant of his waqt (time). "If man ignores his waqt, he ignores his nafs (self). He ignores himself. If man ignores his nafs then man ignores his Rabb. While it is not a hadith, the great Sufis say it and the great Alim ar-Razi, who was almost a rationalist, quoted it often - the famous saying: "He who knows his self, knows his Lord."

Let us all pray so that Allah will grant Shaykh Abdalqadir as-Sufi good health and greater bounties zahir and batin and may we benefit from his knowledge and wisdom and that of all the other shuyukh too.

I am humbled and grateful that his book, The Book of Safar literally journeyed from the Jumu'a Mosque of Cape Town where the shaykh gave those discourses in 2008 and ended up in my hands yesterday - a blissful Friday. Alhamdulillah wa shukrulillah. 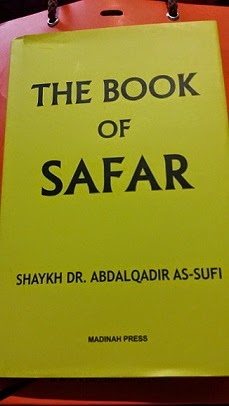